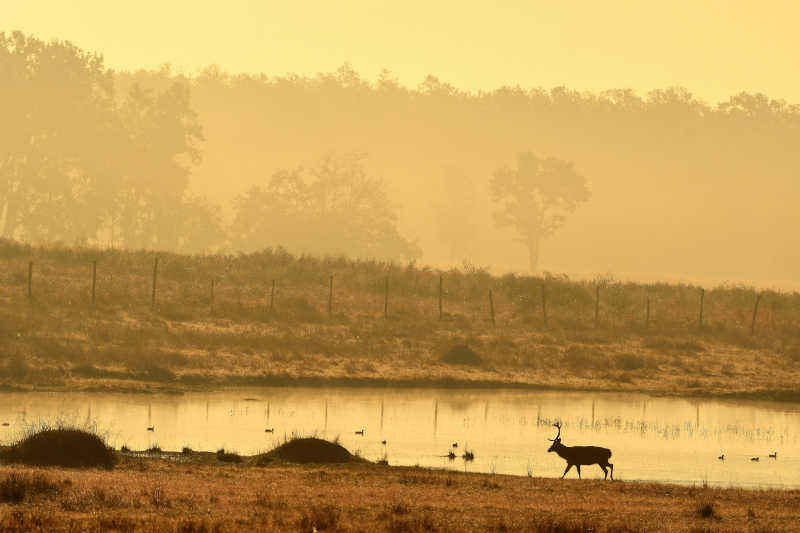 Kanha National Park – About the Forest

Kanha National Park is just a little farther away from Nagpur than the other forests in the same belt like Pench National Park, Nagzira National Park or Tadoba Andhari National Park etc.   It is situated in the Madhya Pradesh in the Satpura ranges. It spans across 1945 sq. kms. of area including the core zone and the buffer area. It was declared as a national park in 1955. It is popular for being extremely beautiful and having a thick tiger population.

Kanha prides being one of the most beautiful forests in Madhya Pradesh with rich birding and wildlife. It is known to be the source of inspiration for the creation of the Jungle Book by Rudyard Kipling. It is very easy to fall in love with the vast grassland meadows of this forest. Innumerable species of plants, insects, birds, mammals including Barasingha or Swamp Deer and reptile dwells in this beautiful surrounding.

Khatia and Mukki are the two main gates as entry point to this forest.  Core zones are Kanha, Mukki, Kisli and Sarahi. For proper coverage of the forest, it is advisable to distribute the safaris with both gates as entry points and explore all four zones. It is also important to be close to your entry points so accommodation should be chosen accordingly. This saves up the time to reach the entry point for safaris.

Since we had 8 safaris spread over 4 nights, we had chosen to stay 2 nights near each of the gates. With entry point as Khatia gate, we had 2 safaris in Kanha zone, 1 in Kisli and 1 in Sarahi zone. From Mukki Gate we had 3 safaris in Mukki zone and 1 in Kisli zone. 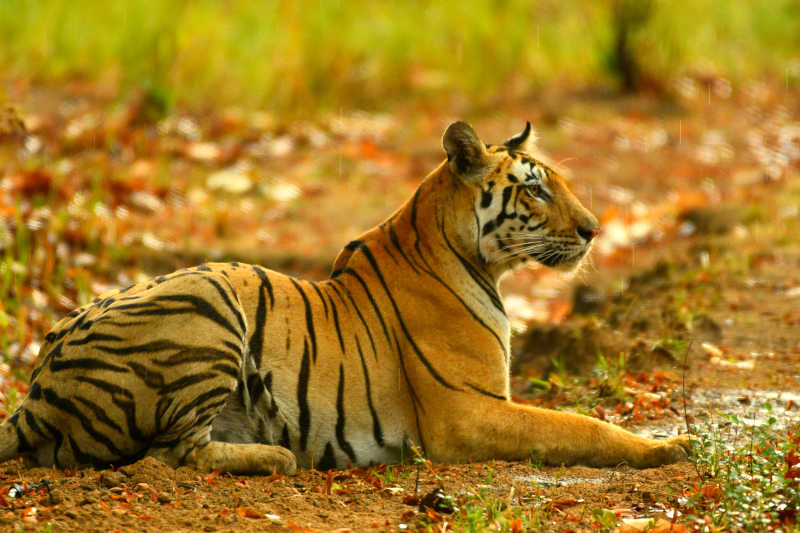 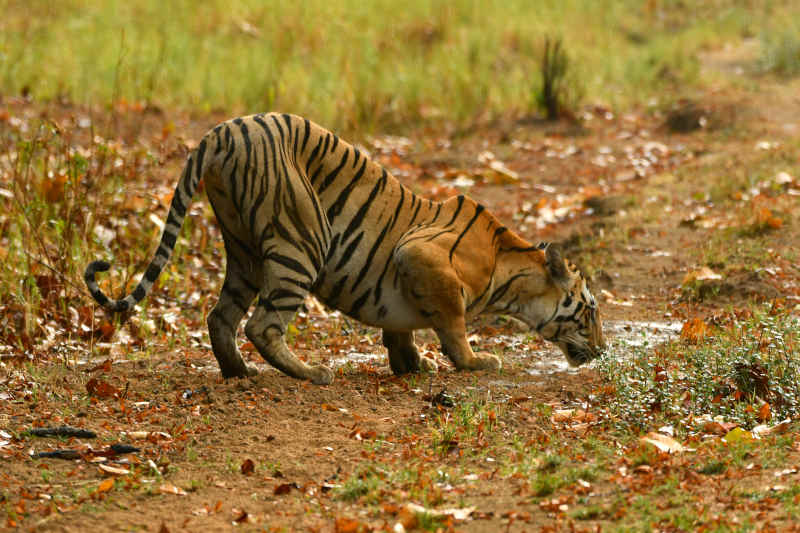 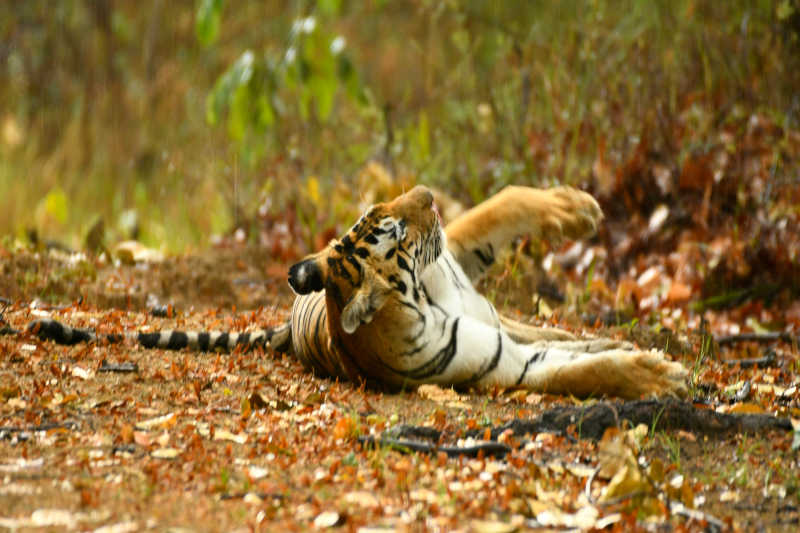 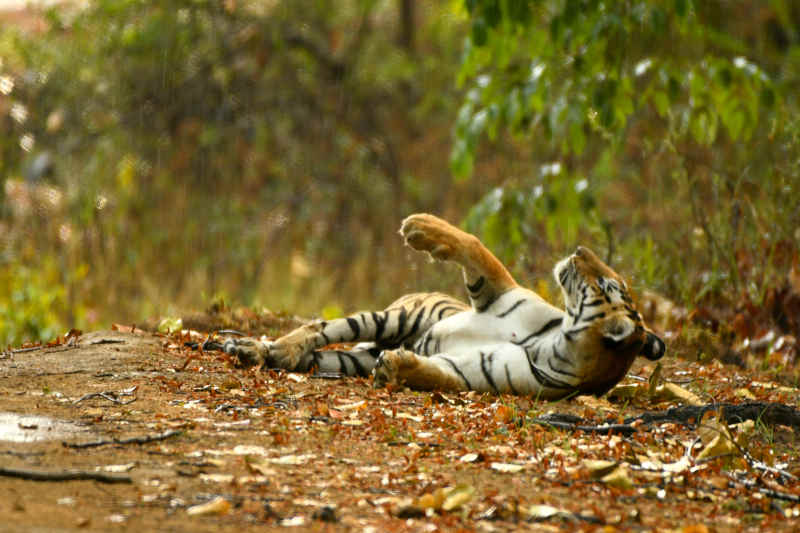 Our safaris were full of suspense and excitement. Two safaris allowed us to enjoy the splendour of the forest with no wild cat sighting but good sighting of mammals like sloth bear, jackals, neelgai etc. Watching their behaviour in their natural habitat was exciting and eye-opening.One of the safari it even rained when we had given up hope of any sighting whatsoever as the routine of the animals was disturbed by the rains. We had to bring down the hood of our gypsy to secure our cameras.

We just surrendered to nature and enjoyed the fall of the droplets on the flowing river and on the leaves bringing them back to life. But nature has its own ways to prove us wrong.  While we wandered aimlessly and hopelessly, Tigress Naina graced the occasion with her presence. She was walking on the road, kind off enjoying the rain and cooling herself. She walked, marking her territory peacefully and then lying down on the middle of the road enjoying the dampened soil and finally drinking water from the puddle. A unique experience it will always be to see her in her elements enjoying and welcoming the rain. 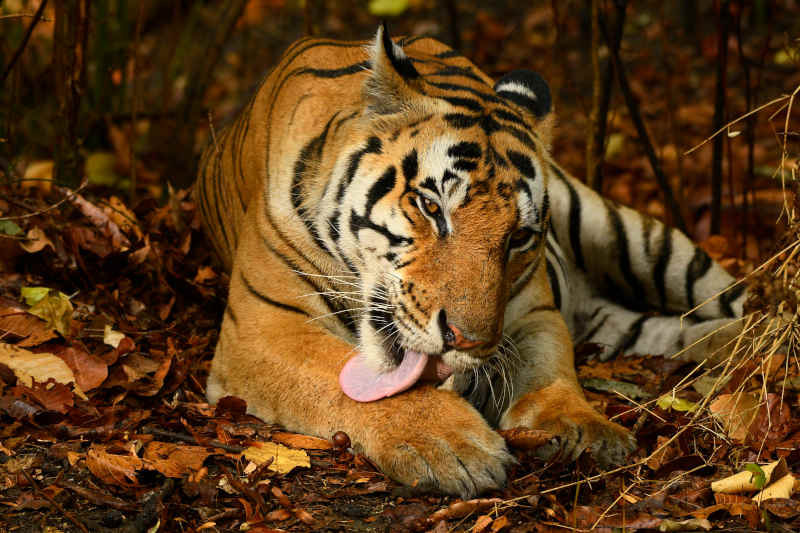 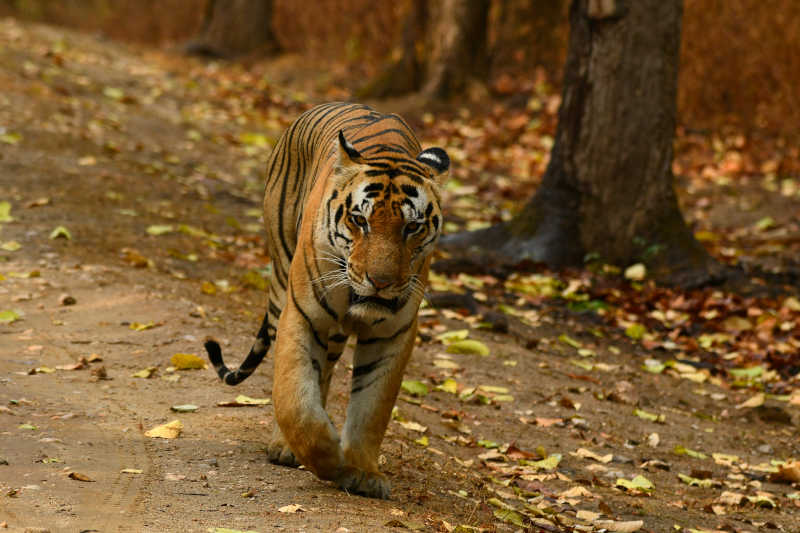 One of the safari, our guide had the tip of a tigress who had recently given birth to 3 cubs was seen with a kill of sambar deer in an approximate particular spot. This tigress had cubs so we were only focused on that sighting. All of us had never seen the cubs so small which was the main reason why none of us wanted to miss this opportunity. On reaching the spot we saw the tigress T59 lying on a hillock sleeping away to glory and the kill was lying at the base of the hillock. At regular intervals she watched around, guarded her kill and dosed off.

We waited there for almost an hour and a half for her afternoon siesta to end, determined to see the cubs. Time was running away and there was no sign of cubs or her waking up. We were almost making our mind to retire when one of us saw tiny steps racing and the set of tiny paws nudging the mother to wake up. Soon followed the other two cubs and started waking her up jumping all over her. She got up lazily and came to the kill. Playfully, the happy family feasted on the kill. We were in an awe seeing the tiny cubs. The cutest sighting of this wild big cat ever.

Another iconic sighting was of the tigress known as the ‘Queen  of the Meadows’. Few gypsy had spotted ‘Neelam – The Queen of the Meadows’. We got the news but we were late to reach the spot. She had already gone into the bushes of grasslands. Guides are familiar with the paths chosen by tigers for their daily water drinking routines. This plays a huge guiding factor in anticipating the sighting.  On the instincts of our guide, we took a chance on her routine path. And there the Queen Neelam walked head on giving us the most amazing pictures.

Our next target was the popular Chota Munna (male) and Tigress Dhavjandi.

It had rained but now our myth was eliminated that there are no sightings during rains, thanks to the show up of Naina – the tigress when it poured on one of the previous safaris. So, we were looking forward to yet another interesting glimpse of the majestic beauties. As soon as rained stopped, while we were roaming in Chota Munna’s territory, we saw him basking in the sun and licking his own body. We stopped with his sight and in very little time after being done with self-licking he walked right towards our gypsy. We went reverse and this continued for sometime before he decided to disappear in the grasslands.

Our guide explained that they lick themselves to keep themselves clean and remove all smells so during their hunt the preys do not get an easy clue of their presence around. Their tongues have antiseptic qualities and can even have the potential to lick and heal their wounds.

This forest was in the mood to grant us all our wishes and it did just that. One hour before the end of our final safari, Tigress Dhavjandi, who also had delivered cubs came to the waterbody we were waiting and enjoyed her splashing time. We had ticked all the wild cats on our list. No regrets of not seeing any other big cats. Tigers had really been very kind to us. We saw the elephants patrolling the forest wanting to ensure that they are safe with the mothers.

We were extremely lucky throughout this trip. Even if we had empty safaris, they were totally made up for by the subsequent safaris. Surely, this was going to be one of the most memorable safari trips for years to come. 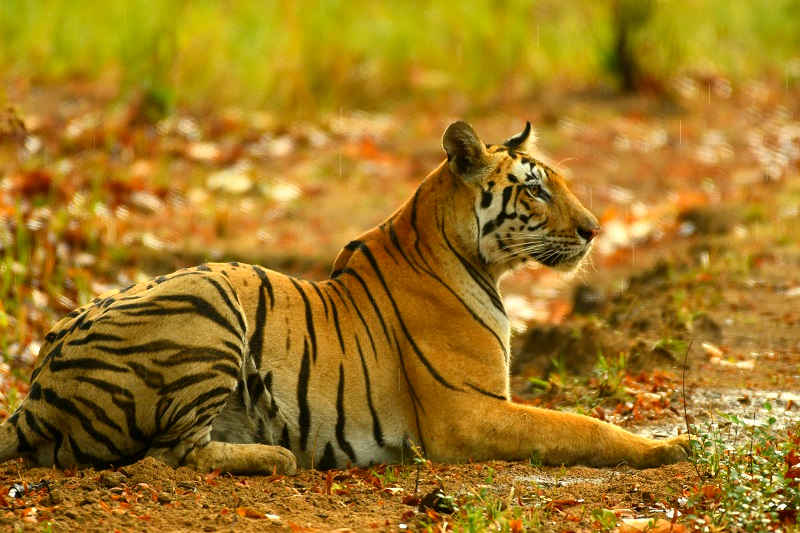 Barasingha or Swam Deer at Kanha