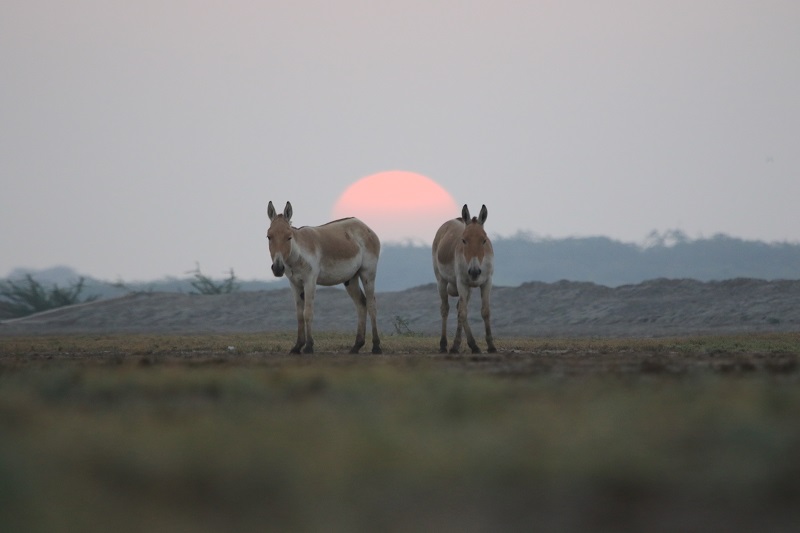 Look left in infinity, look right in infinity – acres and acres of deep cracked dry land is all your eyes will see. Chilly blowing wind hitting your face, eyes narrowing to adjust the blinding rays of sun. How can there ever be any life in this habitat? This is the land famous for the raptors, flocks of pelicans, flamingos, some rare species mammals and most importantly and unique “Wild ass”- the only habitat in India where this species is found. Now, that should be an easy guess – “The Little Rann of Kutch” is the location being referred to.

Typically, winters is the best time to visit this place. Summers would offer soaring temperatures which can get extremely intolerable without a single branch of shade to expect. There are mammals like neelgai, foxes, jackals, wild cat etc. that one can expect to sight in this terrain. One question that haunted my mind as soon as you are in the rann is “No directions, no landmarks, no marked territories, no signs, no pugmarks, no smells and just how can one have sightings here following the standard sighting formulas of the wild ? Anxiousness and excitement were obvious.

The first safari was a good warmup curtain raiser with the first sighting of the most unique mammal, a combination of horse and donkey in its appearance, the Wild ass. The sanctuary gets its name from this unique mammal – Dasada – Wild Ass Sanctuary. Spotted few starlings, wheatears, shrikes, grey partridges, common cranes, bee-eaters, larks, black drongos  before the show stopper made its entry – short eared owl ! extremely sensitive to any presence around it, this one had to be carefully clicked maintaining a good distance for eliminating any scope of disturbing it by our presence. Then appeared the harrier and we were audience to an unimagined nudging and teasing that happened between the harrier and the short-eared owl. There was an aerial show put up by the two before it settled on the ground for a moment to pose for our lenses.

Second safari we again visited the same side of the rann (desert) better known as “the raptors country” as we had not been very lucky with the falcons or other like raptors. Our afternoon drive again commenced on the never ending looking rann (desert) without me getting any sense of direction. Again, a huge herd of wild ass was the first sighting. We circled in search of the raptors. We got lucky sighting a couple as they were catering to their roosting routines –marshy harrier, montagu’s harrier, common cranes, Isabelline shrike (earlier known as red backed or red-tailed shrike) and common kestrel. It was continued tuff luck for the search of falcons and eagles.

A new dawn, next day we headed towards Bajana Gate. The ride to the place early winter morning was quite a freezing ride. Thermals/ woollens are needed for sure. Wind chills are the real culprits more than the dropping temperatures. Flocks of pelicans, flamingos, greylag geese, pochards, painted stork appeared to be a sight everyone would witness. Sunrise was beautiful sight to be a spectator too. Then we got lucky with the sighting of imperial eagle, steppe eagle, greater eagle though at long shot but their behaviours were very well observable through binoculars. But falcons were still not showing up.

Evening safari was again towards another wet land where we got lucky sighting white tailed lapwing (peculiar to this place only). Beautiful bird interactions entertained us the whole safari. Again a few eagles, flocks of greylag geese flying against the setting sun was a picture-perfect frame to capture. We walked around the water body observing the birds and their interactive patterns. Painted storks, glossy ibis, ruddy shelducks, lapwings, sandpipers, stilts, perolas, larks, open billed, black headed ibis, cranes were partying by the shore of the water body chilling the winter. Another beautiful safari ended as the return was even chillier than the morning with still no sign of the falcons.

Now, it was the fifth and last safari. We were determined to focus only on search of the falcons. We started earlier than usual next morning determined to not miss on the early action of falcons as the sun sets in. But nature always has its own mood swings to offer. It was 9 a.m., 2.5 hours in the desert and there was no sign of the sun showing up. Wind chill and gloominess filled the air. Acres and acres of barren land appeared lifeless. No activity whatsoever. We had a quick packed breakfast, still hoping for things to change. Nothing significant happened for another 30 minutes. Now, these were our last 40 minutes in the desert as we had a return timeline and were running against time. And our skilful guide sped up and his enthusiasm clearly suggested that we were about to get lucky. On ground basked Laggar Falcon. We quickly clicked a few pictures and headed in search of the peregrine falcon. And once again, his eyes were glowing – yes ! Peregrine falcon awaited us ! Exclusive sighting as it teased us flying a couple of times. As we were running out of time and had almost an hour return journey, we had to leave the interaction. But we were happy souls – mission falcon accomplished – action packed ending to a memorable exploration !